The rupee is the official currency in India, and the Reserve Bank of India is the authority in charge of issuing currency.

First English settlements in India were located mainly in three areas: Western India (Bombay and Surat), South India (Madras) and those of the Western province of Bengala (Calcuta). As a consequence, British coins in gold, silver, copper and tin were used for trade in these areas.

In early 1830, English power had become predominant in India. The emergence of a dominant power after more than a hundred years of turmoil, allowed the passage of the Coinage Act of 1835, so a uniform coinage could be possible. The new design of the coins issued in 1835 included William IV’s effigy on the obverse and the denomination on the reverse, written in English and Persian.

Coins issued after 1840, meanwhile, bore the portrait of Queen Victoria. The first coin issued under the crown was released in 1862.

In 1906 the Coinage Act of India, governing the establishment of mints and the issuance of coins was passed and today still remains in force.

The shortage of silver occurred during the First World War led to the British Government, George V on the throne, to issue paper money of one rupee, two rupees and two and a half. Silver coins of smaller denominations were issued in cupronickel.

The situation during the Second World War led to experiments in the currency for which standard rupee was replaced by the Quaternary Silver Alloy, coins being issued from 1940. In 1947 these were replaced by coins of pure nickel.

The country gained its independence on 15th August 1947. However, the existing currency kept frozen until 26th January 1950, when India became a republic.

In 1957, India adopted a decimal currency system whereby a rupee consisted of 100 paises. The management of issuing currency is the responsibility of the Reserve Bank of India, which is the central bank, while the responsibilities for matters related to coinage correspond to the country's government. 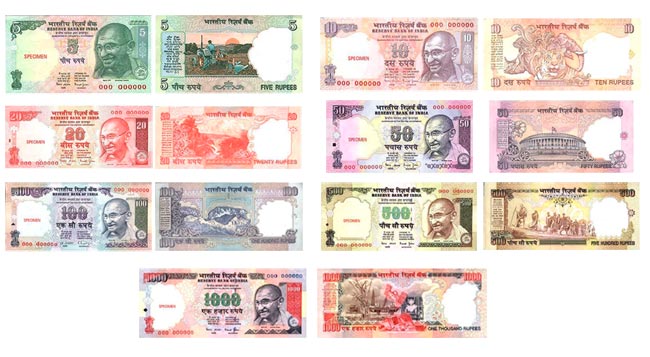 Interesting facts of the Indian rupee