The krone has been the currency of Norway since 1875 and it is subdivided into 100 øres.

The first Norwegian currency was the cent, which is attributed to Olav Trygvason at around the year 1000. For a long time, minting coins was monopolised and when there was a shortage, foreign currencies were imported.

The first series of banknotes appeared in 1965 when King Christian V granted the merchant Bergen Jørgen thor Møhlen the right to issue and pay with notes, which were supposed to be of legal tender from the Ana-Sira valley (Flekkefjord) and the coastal area in the north. The notes were meant to last for a transition period before they were redeemed into coins but Møhlen was unable to face the demands and went bankrupt.

The first issuing bank in Denmark-Norway was the Assignations-, Vexel – og Laanebanken, also known as Courantbanken. It was a private bank but it was subjected to royal regulation. Apart from issuing notes, it also lent money to the government. However, there were no restrictions in the amount of banknotes issued and there were too many of them in circulation. In 1745 the bank had to abandon the payment in silver and the value of the notes dropped. The fact that the state took over the entity in 1773 and continued to finance the Treasury was not of much help either.

In an attempt to clean the monetary system, a new issuing bank was founded in 1791, the Den Danske og Norske Speciebank, with regulations ahead of its time and three subsidiaries in Norway. Regulations did not help though, since the government used this bank to finance their expenses as well. In 1799 it was replaced by the Deposito-Cassen, although it perpetuated the same policy.

In the Money Act that was to become a law on 4 June 1873, it was decided that the gold standard was the one to be imposed and krone the term to be used. The silver standard was replaced on 1 January 1874 for the gold standard. The intention was partly to achieve a more stable monetary value –gold was considered to be more solid than silver – and an international system based on gold fixed exchange rates.

In the 17 April 1875 Money Act it was decided that the country’s monetary unit would be the krone, and that it would be subdivided into 100 øres. It was determined that way so that Norway was ready to enter, on 16 October that very same year, the Mint of the Scandinavian union. This union was held between Denmark and Sweden in 1873 following the recommendation of a joint commission (in which Norway participated) to establish a common Scandinavian currency based on gold. The syndicate was in action until 1914, when it was no longer of practical relevance. However, it was not until 1972 that it would be formally abolished. 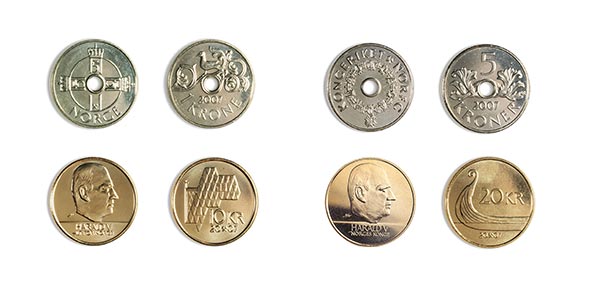